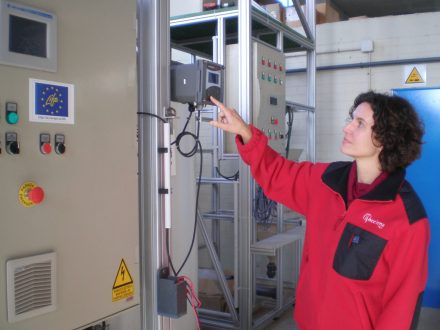 The technology to be studied in this project involves a combination of anaerobic membrane bioreactor for the removal of organic matter (with biogas generation) combined with a nitrogen removal system composed of a first stage of partial nitrification followed by a reactor of Anammox type bacteria, all applied to the main line of the treatment plant.

In anaerobic treatments, the degradation of organic matter to biogas is carried out thanks to the activity of different families of bacteria. The last stage of the process, methane generation through the metabolism of methanogenic bacteria, is the most critical and difficult to stabilize. The main factor of instability in this stage is the slow development of the bacteria protagonists, since the methanogénicas use the energy derived from the degradation of the organic matter for the formation of a very energetic molecule, the methane, leaving very little available for its own growth. As a consequence, the ages of the mud necessary for the degradation of organic matter are very high (sludge retention time, SRT). In conventional systems where no biomass retention method exists, hydraulic retention time (HRT) and mud age coincide, so large volumes of anaerobic reactor are required to be able to work with the appropriate SRT.

On the other hand, although the application of anaerobic treatments may be acceptable in the digestion of residual sludge, because the sludge to be digested is small, when compared to the wastewater treated for the same WWTP, in the case of the direct treatment of urban wastewater would imply the need for anaerobic reactors so large that construction costs would be unassuming. The solution to this problem would be to uncouple HRT and SRT. Thus, the LIFE-CELSIUS process proposes the use of a membrane to retain the biomass and thus to be able to choose HRT suitable to the organic load and SRT suitable for the development of the methanogenic biomass. In addition, with the incorporation of the membranes, an effluent with a higher degree of purification is obtained in terms of COD (chemical oxygen demand), SS (suspended solids) and pathogens. Finally, compared to traditional aerobic processes, they offer lower electricity consumption due to the absence of aeration, and the production of a valuable product (biogas). Without the energy derived from this methane, it is estimated that the operational costs could be only one-third of the anaerobic systems.

Regarding the elimination of nitrogenous compounds, the LIFE-CELSIUS project proposes the use of a partial nitrification system coupled to an anammox reactor (PN / A). It is a well-established system for the treatment of highly concentrated nitrile wastewater return and from which ACCIONA Water has its own patented process, which is implemented under the brand NIPARMOX®. Compared with the conventional nitrification-denitrification (N / DN) nitrogen removal pathway in aerobic reactors, PN / A can save 60% of the energy required for aeration and do not require the addition of an external carbon source , Necessary in some cases for N / DN . However, the differentiation of this project consists of integrating it into the mainstream, much more diluted in nutrients, but which would still mean greater energy savings. Also in this case ACCIONA Water has patented its own process technology, which implements under the brand BIOAVANT® .

Ammonioxidant bacteria (AOB) are responsible for the partial oxidation of ammonia to nitrite, oxidize part of the ammonium content that later take advantage of the anammox bacteria to carry out its metabolism and finally remove nitrogen as nitrogen gas. However, AOB bacteria often coexist in an unstable equilibrium with NOB nitrite oxidizing bacteria. These bacteria compete for ammonia with AOB and oxidize it to nitrate, a nitrogen species that anammox bacteria can not take advantage of. For this reason, a key point in the development of the project will be to optimize the control of the operating parameters to keep the AOB bacteria at their maximum activity and to prevent the development of NOB bacteria.

The application of anammox bacteria in wastewater treatment is a step forward in the use of these bacteria to remove the nitrogen content in effluent from sewage treatment plants. This anaerobic process is characterized by a slow growing type of biomass and very sensitive to several factors, such as the presence of organic matter or the decompensation between ammonium and nitrate from the previous stage of partial nitrification. In the case of these bacteria as well as in the bacteria of AOB, besides the perfect control of the operational parameters, the challenge of the project will be to maintain an adequate activity of the biomass in spite of working at room temperature and not with external heating. That temperature is considered a key parameter for both processes. It is expected that the relatively high average temperatures of the influent sewage treatment plants in the hot climate regions will make this possible..

The main objective of the CELSIUS project is to develop and demonstrate a wastewater treatment system for warm climate areas characterized by low energy consumption. The system proposed is the result of the combination of two innovative treatment processes: Anaerobic Membrane Bioreactor (AnMBR) and Partial Nitrification/Anammox Treatment. The first targets organic matter removal while the second focuses on nitrogen elimination.

The proposed approach involves experimentation with an AnMBR – Partial Nitrification/Anammox pilot plant. This plant will be representative of full-scale conditions and will be suited for treatment of wastewater originated in warm-climate areas with low availability of energetic resources or limited energy accessibility.

To fulfil this objective, the following specific objectives are taken into account:

3.- To eliminate the pollution in terms of organic matter and nitrogen from the incoming wastewater. This will be achieved through the optimization of not only the individual processes, but also of the system as a whole.

4.- To evaluate the feasibility for full-scale application of the optimized system in warm-climate areas such as South America, India, Africa and in European countries in the Mediterranean basin (Spain, Portual, Italy and Greece).

5.- To transfer the acquired knowledge to stakeholders by means of specific education and
dissemination strategies and platforms as well as recommendations to policy makers.

Share
This website is part of the dissemination materials created within the LIFE CELSIUS project (under the grant agreement LIFE14 ENV/ES/000203) co-financed by the European Union through the LIFE programme. The content of this website reflects only the authors’ views and the European Union is not liable for any use that may be made of this information contained therein.

The objective of this project, developed over three years, is implement and evaluation of non-conventional water treatment technologies that allow significantly reduce energy consumption in these processes.

Disposing of an investment of around one million euros, the project has the support of the Life + program, the EU financial instrument for the environment and climate action.