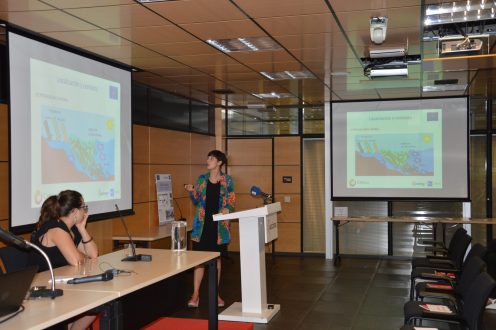 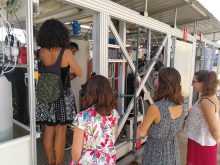 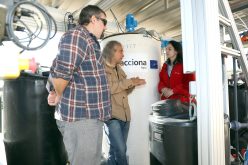 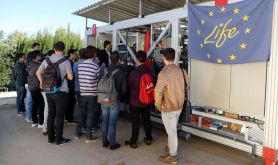 26th September, 2018.- Technicians and managers of European projects, related to wastewater treatment, shared experiences and knowledge in a day of debate to present the final results of the Life Celsius project, driven by EFEverde and Acciona Agua.

Acciona headquarters in Madrid hosted the closing ceremony of this initiative, financed with European funds, which has been developed between the years 2015 and 2018 in the Sewage Treatment Station (WWTP) of Archena (Murcia).

Life Celsius’ goal was to demonstrate the feasibility of a wastewater purification system for warm climates with lower energy costs-up to 60%-and less greenhouse gas emissions-CO2-to the atmosphere, based on a technology that would de developed in two phases: one aiming to eliminate organic matter with anaerobic bacteria and the second one, based on treating the nitrogenous compounds with partial nitrification and two lines of anammox bacteria.

For María del Mar Micó, project director and chemical engineer of Acciona Agua , Life Celsius has been «an opportunity» to develop a technology «that we already had worked on it» and apply it to the main line of a treatment plant, with «a realistic influence and a real plant».

Given it is designed to act in warm climates, it was installed in the region of Murcia, where the average ambient temperature is around 19 degrees Celsius and the influent reaches around 15-25 degrees.

However, the project director pointed out that the high content of influent sulphate «intervened in the process of eliminating organic matter and affected the energy consumption of the system, which decompensated the balance that was intended with the Anaerobic System, resulting in partial nitrification and forced to install an aerobic system».

The elimination of nutrients

However, the elimination of nitrogen compounds in the Celsius plant did yield the expected results; «even partial nitrification was able to continue eliminating organic matter», Micó underlined.

“The partial nitrification worked stably and with the appropriate ratio, while the Anammox filter proved to be a very robust system for these places, with a high capacity of nitrogen elimination», she insisted.

Micó stressed the need to eliminate nitrogen from residual water «because if it reaches the environment it can contribute to problems of eutrophication and hipopsia in aquatic environments».

“Nitrogen promotes the development of invasive species that take advantage of dissolved oxygen leaving the aqueous masses with bad smells and proliferating to the detriment of the autochthonous fauna and flora, she added, a particularly relevant problem in emblematic areas of the Region of Murcia, like La Manga del Mar Menor or the mouth of the river Segura.

In this regard, she explained that Life projects focused on wastewater purification «focus on preventing these nutrients from reaching the environment, either removing it or reusing it as a raw material, as a fertilizer in the field, for example».

The of the Life Celsius project director also stressed the importance of the chapter dedicated to the dissemination of results in Life projects, «so it was crucial to carry out this closing day in which to communicate to the public the most important results of Life Celsius, as well as listening to other types of projects related to the same subject in order to know other advances».

For Pedro Pablo G. May, head of EFEverde, «science and technology issues are very interesting to people when people are informed of them” and this day is another example of communication, another link in the chain of knowledge, because «anything is good to explain what there is».

The science of communicating

The biggest challenge of a journalist is to rigorously «communicate science» and at the same time, reach the greatest public possible, and this «has sometimes led us to have problems with scientists», he said.

He acknowledged that the first thing a scientific journalist should do is «understand the research» and then this knowledge needs to be «summarized and create a nice package that people find it interesting».

That is why, unlike other journalism disciplines, «permanent training in the area of environment, science and technology is essential», he said.

And he gave as an example the other two Life projects in which the EFE News Agency has been in charge of the communication part -Life Infonatur and Activa Red Natura 2000- whose results earned EFE a double recognition by the European Commission.

Pedro Pablo G. May recognized that «with Life Celsius we have had an evident problem, the issue itself, how to reach people with a wastewater issue, but the answer was in the project itself: the energy savings implicit in it and the fact that it was a Spanish project».

In his opinion, «in Spain many things are being done well and the public is not being informed of them and, and in the case of Life Celsius, although the diffusion results are modest, I am satisfied because we are informing about them and we are demonstrating that these news items are interesting for many people».

For this reason, he recommended that the technicians responsible for other engineering projects «think about communication and find a few minutes to, even if it’s in thick strokes, make a brief, understandable synthesis of what you’re doing, because if you manage to communicate you’ll have more influence, much further run and greater capacity to generate money with which to continue researching».

During the day, also participated Ion Irizar and Luis Larrea, from the Center of Studies and Technical Research of Guipúzcoa (Ceit) and responsible for the CircRURAL project, which, financed by the Interreg Sudoe program, focused on the conversion of small and medium-sized. wastewater treatment plants in rural areas in facilities aimed at resource recovery.

Thus, Circrural 4.0 will promote waste water management in rural areas with the paradigm of resource efficiency and therefore the circular economy.

In this sense, Luis Larrea explained to EFEverde that at Ceit «we will focus on developing automatic control technologies to optimize the rural water treatment plants, as well as the manufacture of new organic fertilizers against synthetics, which are proving pernicious».

This research, which «has just started», will be carried out by «a multidisciplinary team with a duration of 3 years, but the work is never finished», he explained; «we are generating new ideas for future projects, R&D does not end, and one always has to be on the move generating new ideas».

In his opinion, «Spain in the last 30 years has not only made a qualitative leap in political or economic terms, but also in technological terms, and in the field of water treatment there has been a very great advance».

He stressed that “We have great potential to compete with the most advanced countries, but we must bet on Spanish researchers and technologists, to develop competitive environmental technologies to generate the change in production model that is so much talked about». 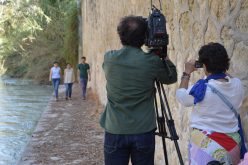